Logistic companies, like JD and Amazon, provide enormous material support for billions of people in the world every day. Similarly, molecular motors in the cell, like myosins, kinesins, and dyneins, walk along cytoskeletons to deliver numerous biomolecules to different destinations required for cellular activities. Malfunction of molecular motors results in severe diseases, including neurodegenerative diseases, brain development disorders, and hearing/vision impairments. Thus, the regulation mechanisms of molecular motors are one of the hot spots in the molecular motor study field.

Class V myosins (MyoV) are the prototype transporters in studying intracellular trafficking. MyoV can walk along actin filaments to transport a diverse array of cargos, including organelles, vesicles, protein complexes, and mRNAs. However, due to the large molecular size and high dynamics of MyoV, the high atomic photo of MyoV with high quality remains a big challenge. Associate Professor Zhiyi Wei’s research team from the School of Life Sciences at the Southern University of Science and Technology (SUSTech) recently published their findings on the development of autoinhibition and activation mechanisms of MyoV by solving the cryo-EM structure of the full-length MyoVa in the autoinhibited/closed state.

Their research paper, entitled “Autoinhibition and activation mechanisms revealed by the triangular-shaped structure of myosin Va,” has been published in Science Advances.

After extensive trials in protein expression, purification, and cryo-sample preparation, the researchers successfully obtained a high-quality sample of MyoV and calmodulin (CaM) complex and determined the cryo-EM structure of MyoV-CaM complex at near-atomic resolution (Fig. 1).

The complex is composed of two MyoV heavy chains and twelve CaM light chains. Each heavy chain contains a motor domain (MD) in the N-terminal head that attaches to F-actin and hydrolyses ATP, followed by six IQ motifs that bind to six CaMs to form a lever arm (LA) for step-size amplification, a long coiled-coil (CC) in the middle region that is responsible for dimerizing the two heavy chains, and a C-terminal globular tail domain (GTD) that recognizes diverse cargos. The complex structure reveals a hinge-like structure, which allows the two GTDs to come into close contact with two MDs for the head/tail interactions, thereby inhibiting the ATPase activity of MyoV. Interestingly, the CC interacts only with the GTD on the left side, indicating a novel asymmetrical autoinhibition formation.

Figure 1. Cryo-EM structure of Myosin Va and Calmodulin complex in the closed state

The researchers further compared the cargo-bound GTDs and the GTD in the autoinhibition state. Surprisingly, they found that the asymmetric binding of CC to the left GTD prevents MyoV from activation by a cargo adaptor protein solely. However, an appropriate cargo with multiple cargo adaptors bound may efficiently activate MyoV via the cooperative binding of these adaptors to MyoV.

Based on the structural, biochemical, and cellular findings, the researchers raised a model of MyoV activation upon cargo loading (Fig. 2). In this model, the autoinhibited MyoVa switches between the closed and “half-closed” conformations. In the half-closed conformation, the MD/GTD interaction on the right side is less stable, due to lacking the asymmetrical sheltering of the CC. In the presence of an appropriate cargo, the multiple cargo adaptors can synergize the disruptive effect on the autoinhibition conformation of the right side of MyoV. Once the hinge structure opens, the triangular-shaped structure is unsustainable and MyoV shifts from the closed state to the open state and starts to transport the cargo along actin filaments. 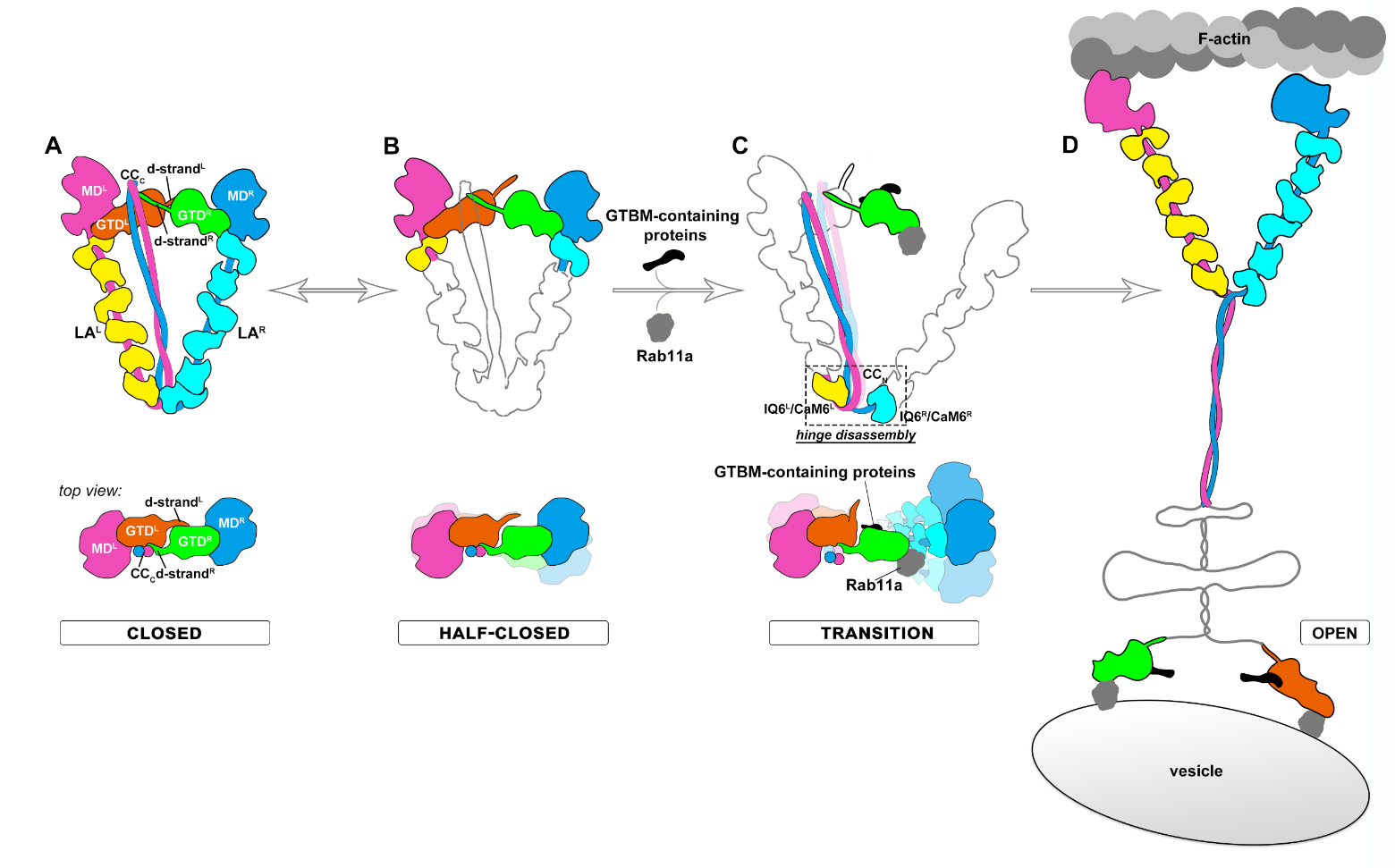 Together with their previous study (Niu et al. Science Advances, 2020) that uncovers a cargo unloading mechanism of MyoV, the research team’s works reveal the complete cycle of cargo transport for MyoV and provide a general paradigm for the regulatory mechanisms underlying the intracellular movement of cytoskeletal motors.

Research Asst. Prof. Fengfeng Niu, Ph.D. student Yong Liu, and Research Asst. Kang Sun are the co-first authors of this paper. Profs. Zhiyi Wei and Fengfeng Niu are the corresponding authors. Profs. Kaige Yan and Cong Yu from the School of Life Sciences at SUSTech also contributed to this study.