The extracellular pH is a critical factor for numerous biochemical reactions and biological processes. Fine-tuning of extracellular pH plays an important role during the regulation of the growth and immunity of animals, plants, and microbes. For example, the pH of human blood is maintained at 7.35~7.45 to keep the normal activity of many life-sustaining enzymes. Correspondingly, numerous cellular components such as soluble adenylyl cyclases, alkali-sensing receptor tyrosine kinases, H+-sensitive ion channels or transmembrane G-protein-coupled receptors are adopted by diverse life systems to monitor extracellular pH and modulate growth, development, and immune responses.

The plant extracellular pH is naturally acidic but changes dynamically in response to both environmental cues and physiological conditions. In the 1970s, scientists proposed the fundamental “acid-growth theory” for plant cell growth. The core of this theory is the auxin-induced acidification of apoplast that activates a bunch of cell wall modifying enzymes and consequently increases the extensibility of cell walls for plant cell expansion/growth.

In some growth-unfavorable scenarios, such as pattern-triggered immunity, extracellular alkalinization of plant cells is the earliest and most easily recordable response, which is therefore considered as a hallmark of plant defense response. Similarly, abiotic stresses, such as salinity or drought, also induce rapid extracellular alkalinization. Many studies have found that changes in external pH can significantly affect plant gene expression, indicating that plants have the ability to sense and respond to external pH. However, the molecular mechanisms that plant cells perceive extracellular pH remain elusive. 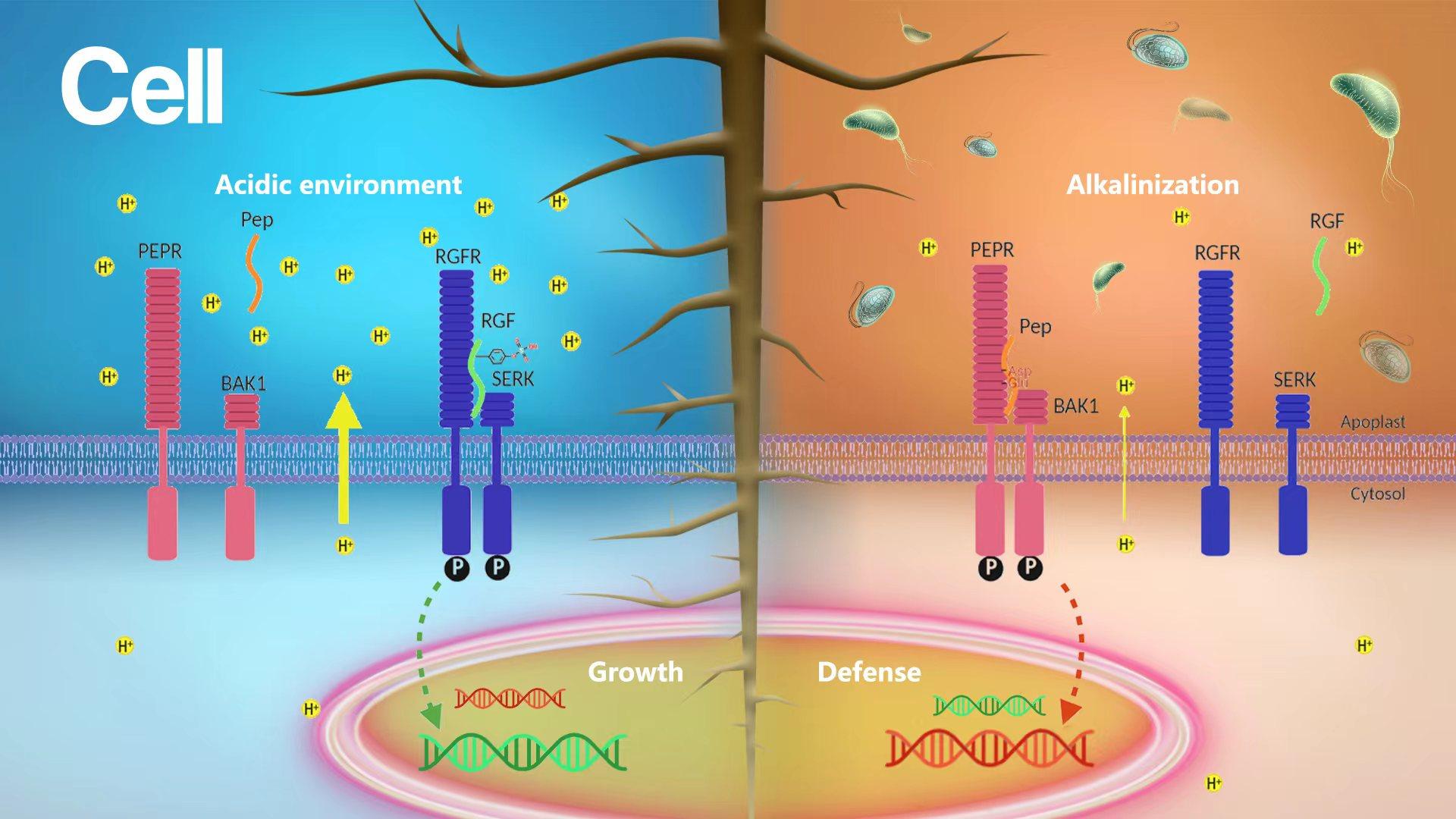 Based on combinatorial approaches of biochemistry, genetics, and structure biology, the researchers then uncovered the mechanism through which extracellular pH is sensed by the RGF1 signaling pathway. RGF1 is a secreted peptide containing a posttranslational tyrosine sulfation (sY), which is required for the interaction between RGF1 and its receptors. In a relatively acidic extracellular condition, the sY of RGF1 is protonated, forming critical hydrogen bond networks with the signature sulfotyrosine-recognition motif RxGG, resulting in the formation of ligand-receptor complexes and the activation of downstream signaling. When the extracellular space is alkalinized, the alkaline-induced deprotonation of sY largely attenuates the interaction between RGF1 and the receptors, inhibiting the activation of downstream signaling. These results supported that sulfotyrosine is the pH sensor for RGF1 signaling.

The scientists found that not only RGF1 signaling, but also Pep1 signaling can sense the changes of extracellular pH. In sharp contrast to the acid-dependent RGF1 growth signaling, the Pep1 immune signaling is alkaline-dependent. Immune-induced extracellular alkalinization can further promote the Pep1-triggered immune response. Based on the structure, there are numerous Asp/Glu-mediated polar interactions at the Pep1-PEPR1 interface.

The side chains of Asp and Glu may undergo protonation when the solution pH decreases to 4.0, in turn disrupting the hydrogen bond network mediated by Asp/Glu. Conversely, Asp/Glu undergo deprotonation during extracellular alkalinization, enhancing the interaction between Pep1 and its receptors, and promoting the downstream immune signaling. Thus, Asp/Glu plays an essential role in pH sensing of the Pep1 signaling pathway. Lastly, an elaborately engineered chimeric receptor through domain swap between RGFR and PEPR switches the pH dependency of RAM growth from acid to alkaline-dependent. This striking result provides compelling evidence to support the findings of the extracellular pH-sensing mechanism in RAM growth regulation. 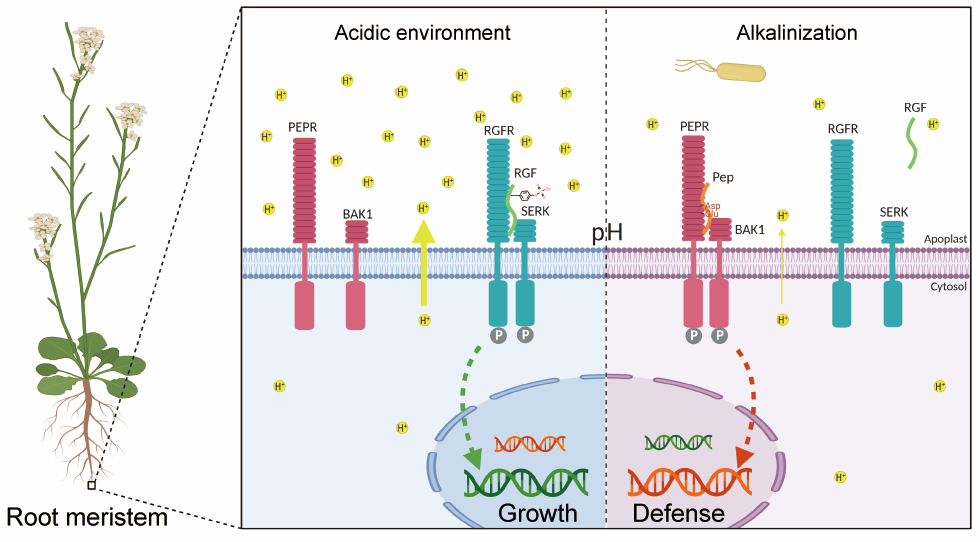 Figure 2. Proposed model for the extracellular pH sensing by cell-surface peptide-receptor complexes in the root meristem

Overall, this study discovered and illustrated a mechanism of extracellular pH sensing by plant peptide-receptor complexes, and provided novel insights into the extracellular pH-mediated regulation of growth and immunity in the RAM. The work also paved a new avenue for balancing the tradeoff of crop growth and immune response by biotechnics.

Dr. Li Liu, a visiting scholar at SUSTech and postdoctoral researcher at Max Planck Institute for Plant Breeding Research (MPIPZ), and Dr. Wen Song, a postdoctoral researcher at MPIPZ and the University of Cologne, are the co-first authors of the paper. Prof. Hongwei Guo at SUSTech and Prof. Jijie Chai at Tsinghua University-Max Planck Institute-University of Cologne are the co-corresponding authors.

The research was supported by the Shenzhen Science and Technology Program, the National Key Research and Development Program of China, the National Natural Science Foundation of China, Key Laboratory of Molecular Design for Plant Cell Factory of Guangdong Higher Education Institutes, The Alexander Von Humboldt Foundation, and Max Planck-Gesellschaft.